Evolution of the Modern RPG programmer

I suppose many of them also enjoy Role Playing Games but that is neither here nor there. RPG stands for Report Program Generator. It is an IBM programming language which had evolved from the early day of punch cards and gentlemen who programmed with it wearing Vintage suits. Vintage suits which were not vintage at that time, because they were brand new. Being an RPG programmer was brand new. But times have moved on and now we have an oldschool RPG and modern RPG programmer paradigm.

/me remembers the nineteen eighties…

when RPGII was this fantastically exciting thing I learned spending hours and hours and hours reading manuals and staring at these weird HUGE sheets of printed green lined paper with seemingly meaningless code typed on them with dodgy faded dot-matrix printouts.

/me spent many a lunch-hour playing…

with a huge metal ruler with all kinds of RPG2 column based stuff on it so I could figure out which indicator was where, on the aforementioned dodgy faded dot-matrix printouts.

/me wonders how IBM…

/me wonders how much longer…

I will have a career in this programming game, writing RPG and generally tinkering with IT stuff. I frequently use the quote “its not my job I just get paid to do my hobby!”

/me wonders if I am just getting old, bitter, twisted…

/me still describes his job role as ‘programmer’…

/me decides to stop using this /me thing…

cause it’s really confusing slash me. Plus its also becoming annoying. If its annoying to me it must extremely annoying to you.

What is an RPG programmer? 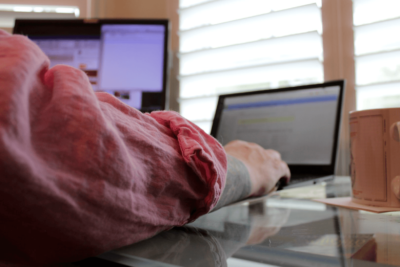 Twenty Years later and the language has evolved almost beyond recognition from those early days. RPG/Free Format is so much improved over the old column based RPGx versions I frequently find it difficult to contain my excitement. My wife has suffered my occasional dinner-time diatribe about this new %BIF technique that I’m using that’s really cool and sexy… when her eyes glaze over I know it’s time to invoke an internal EVAL GEEK_MODE = *OFF 😉

Now, if I’m coding and need to check some particular OPCODE the answer is a simple click/click/Google away. I cant remember the last time I opened a big fat manual and chuckled for the 9,342nd time at the this-page-is-intentionally-left-blank pages.

So, in this modern world being a programmer is no longer an elite, unusual or clever jobtitle.