IBM Deathstar Power System – The Force is strong with this one!

“May the IBM i Deathstar Power System be with you.” 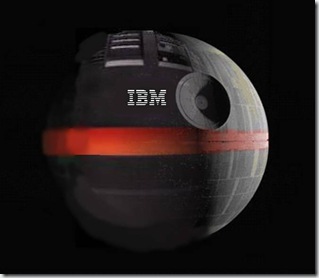 Rochester MN – The new IBM Power™ 995 Deathstar* System is the most powerful server ever offered by the IBM Galactic Empire. This server provides out-of-this-world performance with massive scalability. The Power 995 is by far the most remarkable technological product of the IBM Galactic Empire. It is a brutal and awesome culmination of engineering and science of a galaxy-spanning organization. With unrivaled power, it can perform an infinite loop in under 4-seconds and requires two HALT instructions to stop it.

It was designed to help enterprises, governments and empires deploy the most cost effective and flexible IT infrastructure while achieving the industry’s best application performance. As the most powerful member of the IBM Power™ Systems family, this server provides exceptional performance and massive scalability. It’s full range of complex, mission-critical applications include:

Equipped with ultra-high frequency IBM POWER9™ processors in up to 1000-core, multiprocessing (SMP) configurations, the Power 995 server can scale rapidly and seamlessly to address the changing needs of today’s empires. It can seamlessly consolidate millions of UNIX®, IBM i (formerly known as i5/OS®) and Linux® application workloads onto a single system.

Powered by an array of 12 nuclear reactors generating up to 25 gigawatts of power, the IBM Power 995 can run continuously for 97 years.

With extraordinary power, proven IBM technology and expansive growth potential, the Power 995 server is ready to take your empire to the next level.

Contact your local IBM representative today to place your order!

*DEATHSTAR – just sounds so much butcher than Silverlake.