A new aid to rapid, almost magical, learning has made its appearance. Indications are such that, if it catches on, all the electronic gadgets will be so much junk. The new device is known as Built-in Orderly Organized Knowledge. The developers usually call it by its initials, BOOK(tm).

Many advantages are claimed over the old-style learning and teaching aids which most people are using today. It has no wires or electric circuits to break down. No connection is needed to an electrical power point. It is made entirely without mechanical parts that could go bad or need replacement.

Anyone can use BOOK(tm), even children, and it fits comfortably into the hands. It can be conveniently used in any standing or sitting positing. For example, it can be used while sitting in an armchair by the fire. 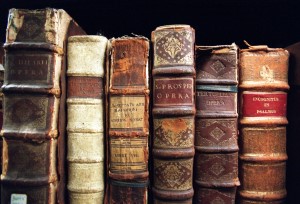 How does this revolutionary, unbelievably easy invention work? Basically BOOK(tm) consists only of a large number of paper sheets. These may run to hundreds where BOOK(tm) covers a lengthy program of information. Each sheet bears a number in sequence, so that the sheets cannot be used in the wrong order. To make it even easier for the user to keep the sheets in the proper order they are held firmly in place by a special locking device called a “binding”.

Each sheet of paper presents the user with an information sequence in the form of symbols, which he or she absorbs optically for automatic registration on the brain. When one sheet has been assimilated, a flick of the finger turns it over and further information is found on the other side. By using both sides of each sheet in this way a great economy is effected, thus reducing both the size and cost of BOOK(tm). No buttons need to be pressed to move from one sheet to another, to open or close BOOK(tm), or to start it working.

BOOK(tm) may be taken up at any time and used by merely opening it. Instantly it is ready for use. Nothing has to be connected or switched on. The user may turn at will to any sheet, going backwards or forwards as he or she pleases. A sheet is provided near the beginning as a location finder for any required information sequence.

A small accessory, available at trifling extra cost, is the BOOK(tm)mark. This enable the users to pick the program where they left off on the previous learning session. BOOK(tm)mark is versatile and may be used in any BOOK(tm).

Once purchased, BOOK(tm) requires no further upkeep cost. No batteries or wires are needed, since the motive power, thanks to an ingenious device patented by the makers, is supplied by the brain of the user. BOOK(tm)s may be stored on handy shelves, and for ease of reference the program schedule is normally indicated on the back of the binding.

Altogether the Built-in Orderly Organized Knowledge seems to have great advantages with no drawbacks. We predict a big future for it.