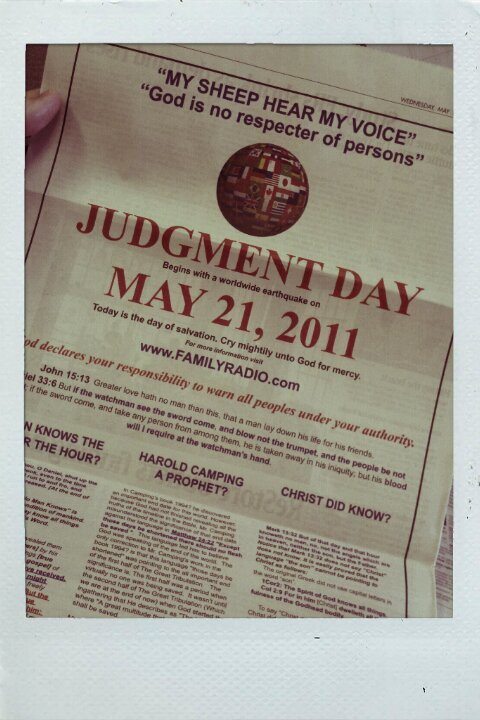 Imagine my surprise, browsing through a copy of USA Today this morning, I turn a page and see a full color ad telling me that the world is going to end on Saturday May 21st!

According to Pastor Harold Camping, the Churches *cough* Religious Loon Leader the world is going to end on Saturday, with a ‘World Wide Earthquake’. I guess this is the Lords version of Rocky Horrors ‘It’s just a jump to the left. And then a step to the right….’

This church has invested over $240,000 on this full color ad in USA TODAY, they’re obviously very serious. The Leader of this religious movement, Harry Camping, is an old boy that owns a network of radio stations he calls “Family Radio”. He used to belong to a traditional church, but after deciding that organized churches are corrupt and only focused on making money and the occasional crazy prediction he decided to start his own. It’s worked out well for him so far…. I wonder how many Church donations were used to pay for these ‘End of Days’ bill boards and newspaper ads?

Everyone is entitled to their own beliefs and opinions – that’s at the very core of my personal beliefs. But, as a non-believer I will probably not be included in the rapture moment – I dont expect to be vanished, or sucked up to heaven, to sit at a Deity’s feet and/or float around on a cloud wearing a white dress and playing a harp.

But wait, I’m sure you have others that will be left behind so here are some ways that I may be able to help:

Once you’ve sent the bank details I will throw in some other free and very Christian services like:

I don’t believe in any of the Gods, Santa or the Tooth Fairy.

But you have a right to believe in whatever you wish as long as it doesn’t harm anyone else. So, let’s hope this campaign doesn’t lead to a rash of pre-Armageddon suicides or any such nonsense. Then again, maybe that’s just Nature’s way of culling the weak minded.

I read a Bible quote on another website which said:

If you’re a Camping follower, open your eyes, cause you’re headed for a pit.

This says that the End of Days will come when nobody expects it. This Newpaper advert saying its coming on Saturday means that some people DO expect it. Therefore it cant happen.

When to use EOF or FOUND in RPGLE?

Doing Loop the Do Loops in RPG3 and RPG /Free