Herman the Honda is more like Herman the Sherman Tank

So, Herman has been a terrific little car over the last year. 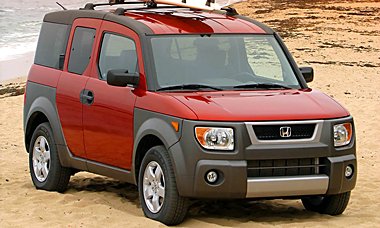 The complete opposite experience from my nightmares with Boris the Landrover.

These Honda Elements are great little mini-SUV’s that are economical, cheap to run, roomy inside and generally just good fun!

He’s driven from South Carolina to Texas (twice), raced up and down the interstate between Charleston SC and Roanoke VA every two weeks for the last six months. In February we loaded up with stuff and drove to California. Never missed a beat. Started every time. Cruised at highway speeds merrily. Never been washed during my 14k miles of ownership. Only problems have been: one new tire (from nail on the road) and one head lamp bulb replacement. Bloody good job Honda!

Then I come out from work and the exhaust (or muffler as my American chums call it) seems to have died a terminal death.

Suffice to say… I am going to have to think about the exhaust system thing… I wonder if I can find a muffler shop and get a second opinion?

In the meantime, for the next few days anyway, if you hear a roaring grumbling little orange tank approaching you on the I5 south of #LA then thats probably me… looking shamefaced 🙂

UPDATED: I got the exhaust fixed rather than replaced. Saved me a bucket load of $$